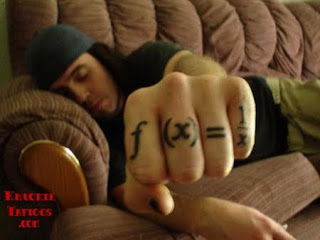 I used to have a math phobia that continued to produce math anxiety dreams well into my 20s. Phobia is a strong word. I’d say more of a strong indifference coupled with a side of “when am I EVER going to have to use this crap?” In elementary school, I dreaded the math lessons where you were supposed to patiently use the math manipulatives to solve problems, like finding square root with beads and stuff. Once I found a calculator, I pressed that square root button to get the answer and never looked back.

In high school, my dad tried to help me with higher math. Much to my father’s dismay, I didn’t get along well with math, even though I was pretty good at it. As an engineer, my dad loves numbers and math and problem solving and whatnot. He tried to convince me that the process of math was fun (as I was in tears, shredding up my homework in frustration.) I insisted that the answer, not the process, was the fun part. I may or may not have screamed, “I don’t care HOW you get the answer, just give me the answers!” His little engineer heart probably broke into 6 equal pieces (1/6ths).

My math teacher in college tried to “sell” math to me by turning my complaints into a snazzy “equation” he liked to call “Confusion minus frustration equals inquiry!” He even made me write a stupid essay on it. I didn’t do so well, because I wrote how the equation was not pertinent to me because I had more frustration than confusion, thus I had negative inquiry. Ha! He got served by my English writing skills! In return, I got served my only C in college (nerd alert).*

Anyhoo, recently I have been writing curriculum for new special education teachers on how to teach the core academic areas to students with disabilities. I was en fuego on the sessions on reading, writing, and oral language. When I got to the part where I had to write three professional development sessions on math for students with special needs, I tried to quit the project. Then, they gave me a raise. I calculated how much of my credit card I could pay off with it and stuck it out. I got served by math, once again.

Around the same time, I started working with a high school student with a math disability (dyscalcula) whose hatred for math made me look like Euclid’s lover. We started with the basics. How can you hate the basic math facts? It took two weeks to convince this kid to even attempt simple problems. We rated her anxiety on a scale of 1-10 when the math was simply in the room with us, and it was always a 9 or 10. There was no way we were going to improve her math skills without working on the anxiety piece of the equation first (pun intended). I asked her to verbalize all her thoughts and beliefs about math as she did the problems (e.g. “when am I EVER going to have to use this crap?” “I should be able to do these easy ones” “I hate math” “I’m going to get all these wrong etc etc). As I looked at high school mini-me, I realized that both she and I needed to reframe our thoughts about math. And girlie needed some confidence in her basic skills.

After a few weeks, the girl could finally bear to practice basic skills with me. We had to use metaphor to get her to not think she was doing “dummy math.” She was a skateboarder, and I told her that in math and skateboarding, she had to practice her basic moves before moving on to other tricks. And like any activity, you have to feel confident in the basics first. You can’t do a flip trick without learning the ollie first (skateboarders–right? I was on the spot). We talked about how her learning disability made the basic facts more difficult and she was going to have to practice more than other students. She started attempting math, but then her negative beliefs were getting in the way.

After finishing a page of mixed basic facts:

Girl: I probably got most of them all wrong.
Me: Would you be willing to see if that’s true?
Girl: I guess.
Me: (counting items correct) one..two..three…well it looks like you got 19 out of 25 which is about 2/3 correct. So is it true that you got most of them wrong?
Girl: No…Dang! I got served!
Me: Yes, AND by MATH nonetheless.
Girl: That totally sucks.
Me: I know. I’ve been there.

We ended up laughing about it, and she continues to work with me. As I try to “sell” math to her each week, I hope that on some level, I not only help her through high school, but prevent her from having math anxiety nightmares in her 20s. And when I finish writing these math sessions of my curriculum project, I promise to post how to help students with math disabilities. Until then, your suggestions and resources are most welcome!

Comments on You Got Served.