Question: What could possibly make 2 and a half million people stand in subarctic weather, crammed together for 6 hours waiting for a person to speak for 18 minutes?

Answer: The inauguration of Barack Obama!

I have never been so cold and so happy at the same time. Going to deliver my students’ letters to Obama was the best idea. I think my students had the sense that I would be able to trot up to Obama and hand over their letters. Try explaining symbolism to 11 year olds, it’s tricky. I simply told them, I would do my best to get them to him. And I did.

My fiancé and I traveled from California on a red-eye flight and took a bus to a train to a 20 minute walk to our hotel in Maryland. We promptly plopped down our stuff, and spent a few days before the inauguration taking it all in. Everyone was in such positive spirits. Strangers cried and hugged each other, at the simple mention of what was to take place on Tuesday.

The day before, we walked miles and miles to get to the White House, to take pictures for the students of me with their letters. There was a chant-leader guy from (where else?) San Francisco, leading groups of people who walked by with chants of “Bye Bye Bush!” The White House was actually blocked off because someone had earlier thrown a shoe over the fence at Bush (the kids loved that part, by the way). So we settled on taking photos by the Washington Monument and mailing off the letters from DC. Thanks to the wonders of the “internets” on my phone, I sent the picture right to the classroom.* 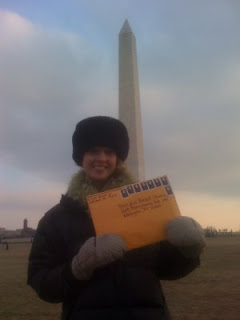 The day of the inauguration, there was a pilgrimage of sorts from Maryland that involved a broken down Metro, hours of walking through throngs of people and National Guard people and Secret Service and volunteers trying to direct us where to go, and a stealth mission through a small space between some port-a-potties to get in.** We had to, as each entry point to the mall, we were told it was full. We ultimately got in and spent the frigid hours waiting for Obama getting to know the people around us. Hey, we had like 4 hours at that point, so I made them start with their birth and move forward from there. My fiancé taped everyone around us about what the inauguration meant to them. When he puts it together, I will be showing it to my class.

I will not lie, this inauguration experience will become more and more fun as I mentally erase being cold, tired, and cramped for hours on end! I am actually amazed that there were zero arrests, given the circumstance. That is how positive and overjoyed the crowd was to be there. People who got fussy were quickly redirected to be positive. I even overheard one teenager admonish his friend who was being pushy and kind of rude, “Don’t make me kick your ass on Obama Day! We Are One, remember?” and the crowd erupted in laughter. Nothing could spoil our moment. And the second Obama came out, it was all worth it. I just hope the goodwill and hopeful spirit continues. Any time I need a reminder, I will read the copies of my kids’ letters. Especially this one.

I have a question for you. What does it feel like to be president? I would like to get people off the street. Because everyday when I go to school I see people sleep on the street and it just breaks my heart to just look at that it just makes me cry. I want to put up more buildings more houses and stop smoking please for everyone. When you are on a stage you can tell people to stop violence.

p.s. may be your family can please come to my house. I would be happy and then my family and I could meet you. If you receive this letter please write back.

I hope he does. Even if it is a form letter, it would mean so much to my students to feel like their new President is listening.

*I think years to come, I will be telling the tale of inauguration weekend, and my future children and grandchildren will look at the pictures and be puzzled as to why I look like I am in Russia. So maybe the faux fur hat was a bit much, but I don’t care that I looked like I belong with Dr. Zhivago, it saved me from hypothermia!

**Quote of the day: “We have been through so much crap today to get here. Literally.”

Comments on Yes We Did