Ones of tens of you spoke. I listened. Brought to you by the Facey Face fans, here are the behavior plans I have written that have fallen, well, flat on their facey faces. And just because I’m feel benevolent, I’ll throw in the learning point in a bold type, so if you are slammed with end of the year assessments like I am, you can get the tips and come back later in the summer for the deets when you have your Mai Tai and Calypso music playing in the background of your glorious, glorious summer off.

1) The Cat that Trained the Bounty Hunter

This is a tale I literally could not make up, so you know it is a true story. I had a teacher once ask me to make a behavior plan for “Doug.” She went on and on about how Doug’s behavior was escalating and she didn’t know what to do for him. Every morning: “Can we talk about Doug’s behavior plan?” One day, she had her hand all bandaged up and she pleaded for me to write the plan. The only problem? Doug was her FRIGGIN’ CAT. Yes, that’s right, she was harassing someone with a 1:2500 psychologist to student ratio to help her with her cat.

Doug was scratching and biting her all the time and she didn’t know what to do. I finally gave in and asked what was the antecedent to Doug scratching her (seriously, was I really using my Ph.D. for feline behavior plans?). And it went a li’l something like this:

CP: So what should I do?

Me: Um, don’t put him in a carrier and don’t reach in to pet him?

And this part isn’t related to the behavior plan, but this woman was a BOUNTY HUNTER before she was teacher. I shudder.

Learning Point 1: Don’t do the same thing over and over again and expect a different outcome. You must change your behavior if you want the behavior of another to change (cat or otherwise).

Learning Point 2: Back awaaaaaay from the crazy person and try not to get too depressed that this woman is teaching children.*

2) Careful What You Wish For…

A few years back, I worked with this delightful 4th grade girl who had, shall we say, excellent verbal expression. However, it was much too colorful for prime time school hours and it was often expressed at inappropriate times and for very seemingly minor events. She was a girl who had a keen sense of justice and I think fancied herself a bit of an expert in…um…everything. True, she was a gifted little poppet, so she did know a lot. But she was the first to point out the teacher’s mistakes or classmates’ lack of understanding, and not in a polite way. She called kids names if they disagreed with her, and often insisted that she be heard by getting on her chair and screaming.

We decided to harness her desire for verbal expression and attention (the presumed function of her behavior) into another behavior that could meet the same need, but not disrupt, oh, EVERYTHING. We gave this little Poppet her very own Expression Journal and when she had a point that she wanted to make, she was to write it down and share it with her teacher during recess. This teacher was a secret psychologist at heart, because she sat down every recess with her and validated her thoughts while giving her an alternative (e.g. “You wrote, “Henry is a f***ing idiot.” How about we revise that by writing, “Henry has ideas I disagree with!”)

Well one fine day, this teacher conducted an experiment that required a little deception to illustrate her point. The rest of the class got it and thought it was funny. Well, Poppet FLIPPED OUT when she found out her teacher had “lied.” She stormed off to the back of the class, in a corner, and wrote a five paragraph persuasive essay about why the teacher should be fired. It had great structure, with supporting evidence, and a friggin’ conclusion. “In summary, Mrs. X should be terminated because a) b) and c)…” And I heart this teacher because after reading a manifesto on how terrible she was, I heard her say to the girl, “Excellent use of your expression journal!”**

Lesson #3: Sometimes you have to settle for the next least inappropriate behavior before you get to the appropriate one. Celebrate small victories in the right direction instead of holding out for perfection.

I have read 8 hojillion behavior plans and behavior goals in my day. That’s a scientific fact. Some are excellent, specific, measurable, attainable, and revised frequently to sustain efficacy and I shed a tear of joy. Most I come across are mediocre, but not harmful. They tend to be too general (“Diego will do his work”), negatively worded “Anna will not curse”), or non measurable (“Curtis will improve his classroom behavior.”) They are easily fixable. Then, there are the ones I read that make me think the Cat Bounty Hunter was reemployed and got a job writing behavior plans.

I kid you not, I came across a behavior plan that had a goal for an Autistic child to eat the middle of an Oreo cookie to address his issues with sensory sensitivities. Wrong! Wrong! Wrong! On so many levels:

a) Not heart healthy
b) Not educationally relevant
c) Not cost effective
d) Not a functional adaptive skill
e) What’s next year’s goal: ability to tolerate frustration of Oreo crumbling when he dunks it in milk?

Lesson #4: Make the goal educationally relevant or at least teaching a life skill that is useful outside of the classroom, and

Lesson #5: For the love of Pete, consult with your school psychologist for help with writing behavior plans! 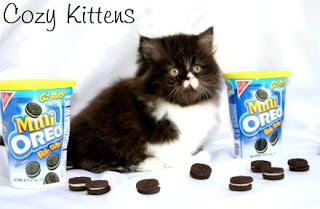 *Thankfully, she did not come back a second year to teach. Hopefully, she never taught again. She asked me for a letter of reference a few years later and I respectfully declined. Actually, she also didn’t really ask me, but rather sent me an email demanding I write one. I declined to answer the email.

**Follow up story: Poppet took it one step further. The next day, Mrs. X got a note from the “superintendent” approving her request and she put it in Mrs. X’s mailbox. The writing was suspiciously like Poppet’s. Gotta give her props for her creativity. Luckily, Mrs. X was a secret psychologist and didn’t take it personally.