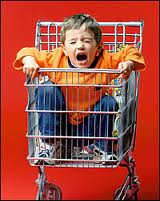 When you’re a school psychologist, you hear a lot of uncensored
statements made by kids:

“You’re fatter this year, are you pregnant?”

Kids don’t always censor. It’s a fact. And each time they say
something socially inappropriate or unintentionally mean, I use it as a
teachable moment to build social skills. Or if a kid who lacks verbal skills to
mediate conflict takes a swat at a kid during playtime, I see it as a chance to swoop in and
teach them what to say next time instead of hitting. I think this inclination to turn transgressions into learning opportunities applies to parenting as well as an educating. It’s kind of common sense, no? Apparently not.

Last week, a little boy took a swat at my Baby B in baby Spanish class
when she had a toy he wanted. Oh no he di’nt! I looked expectantly at the mom to correct the
behavior, and she did nothing. Nothing! Not a word in English OR Spanish.
Grrrrr. It was all I had not to turn all Mama Oso right then and there.
Then this weekend, I was at the grocery store and Baby B and I kept running into this mom and her toddler in many aisles. Each time, Baby B waved at them, because that’s
her new thing. She likes to do “the royal wave” to no one in particular, as if in a
parade of her subjects. Anyhoo, after running into each other for like the 3rd
time, the mom and I exchanged the perfunctory “Ha ha, fancy finding you in the
cereal aisle too” smiles and the kid screams, “I don’t want to see
that lady again! I don’t like her!” Wowza. Okay so whatevs, four year olds
don’t censor and are very capable of saying stuff like that on a daily basis.*
But the mom didn’t even take that opportunity to say anything. She just
pretended like it didn’t happen and shuffled away, eyes downcast. Okay, fine. Teachable moment, gone. But you
know, I’m off duty, so I didn’t say anything. Plus, I know it takes a village
and all, but most parents don’t appreciate when you try to socialize their kid
in the cereal aisle.**
Then, later on I was walking in the neighborhood with Baby B and my neighbor’s elementary school aged kid and the dad were in their front yard so I did
the “stop and chat,” as you do:
Me: Hi there! [to kid] Looks like you have a book! What are
you reading?
Kid: [without eye contact] I don’t want to show it to you.
Me: [cheerily] Okay then, perhaps another time!
Kid: [screaming in my face] I SAID I DON’T WANT TO
SHOW IT TO YOU!!!
Dad:
I mean, come on! Can we at least say something here? I can
only hope the dad addressed it later. I am not trying to be judgy, it is sometimes difficult
to come up with parenting pearls of wisdom on the spot when your kid says
something rude. But how about the classic, “That’s not polite.” Have that one
in your back pocket, maybe.
Of course, as a school psychologist by trade, it is tempting to bust out the Second Step socialization curriculum on my neighbors or grocery patrons (I have it in the trunk of my car!), but I’m guessing it’s not really my role to instil pro-social behavior in random children.  But in the schools, I definitely see my role as helping children and adolescents practice kind words and expressing themselves appropriately. My go-to statements when a kid says something a bit rude and I’m taken off
guard are usually “That’s not polite” or “That’s not kind” with a dash of the disapproving “Teacher Look.”  I was, in fact, raised by a teacher, so I think I inherited a pretty good one.

It’s not always easy though on a day-to-day basis, especially walking
through middle or high school hallways, as there are a thousand little
decisions to be made about which rude comments to address and which to let go. I
have fallen into the trap of trying to intervene and getting cursed at by a pack of middle school boys, which
is no fun at all.
I suppose my general rule is that if a comment is sexist, racist, or
homophobic, I definitely say something, even at the risk of verbal retaliation.
Run of the mill cursing? It depends on the age, context, and if I have a relationship with the kid or not. Usually a warning with
my teacher look is enough.

Oh, and another piece of advice: Don’t use google images with the search term “Teacher Look.” There’s some erm…interesting stuff there. I went with a picture of kid in shopping cart for this post because this is a PG-13 blog, people.

*You have to follow @preschoolgems on Twitter for a sample
of things preschoolers say. Classic stuff. One of my recent favorites: “Babies are kind of pets.”

**By the way, I’m fully prepared to write a post at a later date when I
detail how I inappropriately handle a situation with Toddler B in a
grocery store. It happens to the best of parents.It is only a matter of time, really.

Comments on The Teacher Look.