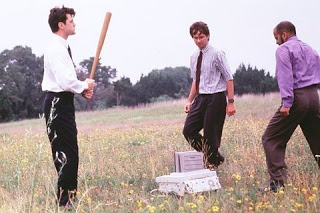 I’ve been following the saga of Mrs. Mimi, and her battle for basic needs in her school, such as a parking spot, in My Kingdom for a Parking Space. While hers takes the cake for wackness in education, I have to report that it’s pathetic that I can’t get a working printer in the public school on the cusp of 2009, especially when my job entails writing lengthy reports on whether or not kids have learning disabilities, Autism, ADHD, Emotional Disabilities, etc. etc. Not to toot my own horn, but I think it’s important for parents and schools to have a written copy of such things.

I wont go into boring detail, but on Tuesday, I almost lost it, in manner of the movie Office Space in which the guy freaks out because the printer keeps saying “PC Letter Load” and he ends up smashing the thing with a bat in a field after work. Since I have a nonviolent temperament, I will use an “I message” instead. *

Printer, I feel frustrated when things that should take 5 minutes, like printing a report, takes days because I have a laptop with no Internet or printer connector so I can’t print at school.** I feel sad that I have to drive 10 miles away to use the one printer that we have for the 40 psychologists. I feel angry when the printer wasn’t working, then it was, but then there was no white paper. I need A WORKING PRINTER.

The funny part of this story is that I used Twitter to voice my frustration, writing, “All I want for Christmas is a working printer in my school” and this morning, I received a notice that Riso Printers, Inc. was now following me on Twitter. Stay tuned, Riso.

*For those of you who don’t hang around the yoots, educators are big fans of the “I Message” in which you tell someone how you are feeling and what you need. Some of my little ones don’t quite get the concept yet, and say, “I hate you.” We’re working on it.

**Don’t say flashdrive. I forgot it that day.

Comments on My Kingdom for a Printer