I gotta get out of my Ides of March funk, so here’s a jaunty little post on modeling. My husband and I are the face of Lenscrafters. I realize this is very random and totally not related to school psychology or education, but I’m gonna make the case that it is.

What is advertising all about anyway? Basically, putting people like you with a product and selling an idea that the product is fun, sexy, exciting and you NEED it. Doesn’t our pic here just make you want to run out to Lenscrafters and get yourself some Burberry specs so you can have as much fun as husband and I? Don’t pretend like you don’t ride piggyback on your spouse on the weekends in Union Square in San Francisco loving your life and perfect vision. 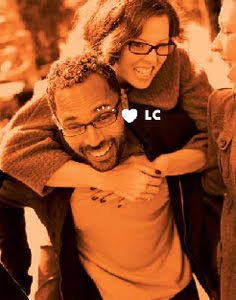 Funny thing is, this came out on the first day of our Honeymoon, and we saw it on a billboard in Santa Monica. I hoped it wasn’t too symbolic of our marriage to come, what with me on his back and growling at him (but see how he thinks its fun?).

As I work with kiddos and teachers and parents in the school, I see modeling in action every day. I see kids who are saucy and fun and then I meet their mom, and she is saucy and fun. I see angry kids who blame everyone for their problems, and then the parent does the same thing in a conference. We know that kids learn by watching, but we sometimes forget. I read a great quote once that we shouldn’t be afraid our kids aren’t listening to what we say, we should be afraid that they are watching what we do. TRUE DAT.

Sometimes, I see irony. I hear teachers screaming at kids to use their inside voices. I see staff freaking out and telling their kids to calm down. I see staff treat kids with disrespect and then they are shocked when they get disrespect back. I’m no angel myself, though I pride myself on being pretty unflappable (unless I’m planning a wedding, when I go from Bride-Chilla to Bride-Zilla in the span of a day). I tend to remain calm in most situations, and pride myself on being the calm in the storm. But even I lose it once in while, and I am not a good model (of calmness, not designer glasses).

I saw myself in action yesterday. I was working with a student who was one of those guys who working with feels like working with molasses. Angry, angry, molasses. He was so slow in his processing, and that made him really mad and want to give up. I tried to model enthusiasm and put on a “learning party” to fool him into thinking testing was fun. I even called testing “activities” and then he called me out on it and said, “These aren’t activities! You lied! These are tests!” I managed to get through about 45 minutes of testing before my Oscar ™ performance for Best Actress in a Pretending this is Fun Role was done. We agreed to reconvene after a break, mostly for me.

After the break, he was worse. And I had the most slow-moving test in the world left to give (TAPS-3, anyone?). It’s torture. For me. And I think he knew that. But I had to do it that day, because of course, the IEP meeting was in 2 days and I had driven about 30 miles to work with the kid. I couldn’t give up.

Unfortunately, my exasperation was contagious. I initially presented it as a task he had to “just get through to be done forever with my activities” and he ended up falling asleep during the sound blending task. Like, snoring asleep. I woke the young man up, and proceeded with my Oscar ™ worthy performance that he had just slept through the BEST PART! And you know what? He totally finished it and said at the end that it was “kinda fun.” So the moral of the story is if you approach testing as drudgery, you model that testing is a drag, and the kid responds. Model enthusiasm and their mind-set shifts. And if you are bored or unenthusiastic about testing, especially if it is the test that makes you want to cry every time you have to give it for the squillienth time, fake it ‘till you make it.

And the Oscar goes to….The lady in the Burberry specs.