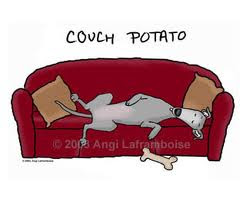 I don’t know why I continually find myself writing about my dogs over summer break. But it has been a while since I had to use my “children aren’t dogs” disclaimer, so I thought I’d dust it off for olde timey’s sake.*

Since I’m home now, being a lady of leisure, I have had the chance to observe my dogs closely. I used to feel badly about leaving them all day for work, but it turns out they actually just sleep all day. This morning, I thought I’d be a good puppy mama and take them on a walk, and I got out the leash for my greyhound, and he didn’t even get up off the couch. I called to him, and he closed his eyes, as if to say, “Please. I’m sleeping in.” This dog is LAZY. In fact, greyhounds are nicknamed “the 45 mile an hour couch potato” because they are really lazy animals. I guess they are storing up for the big sprint, but still, what dog doesn’t want to go on a walk? I used to be alarmed by his lethargy. I even took him to the vet once because I thought something was wrong with him (clinical depression? Thyroid problem?) , and after $300 of lab tests, the diagnosis? Greyhound. Awesome.

I only bring this up my lazy dog because a) he’s right next to me, being lazy, and I’m out of school so what else can I write about? And b) because it burns my soul when kids, parents, or teachers use the word “lazy” to describe a student. To me, the word lazy is used not as a transient state of being (see Bruno Mars’ “Lazy Song” for detail–Today I don’t feel like doing anything), but it is often used as a personality or character trait in a student. It kills me when kids describe themselves as lazy in school, as it suggests the whole problem is a motivation or personality issue.

I was working with this teenager a while back who ended up having a pretty severe language-based learning disability that had gone undiagnosed until high school. During the social-emotional section of the testing, I asked him if he had one wish, what would it be. He said, “To not be lazy. I’m super lazy.” *soul burns* I ended up asking him, “Were you born lazy?”** and he laughed and said, “No.” I took it a step further. “When you were a toddler, did you sit around on the couch and not do anything?” He laughed again and said, “I don’t think so!” So I asked, “When did being lazy start for you?” He then really opened up and said that it started in 5th grade when school work got “really hard and they moved too fast.” He went on to explain he ended up not studying because he felt he couldn’t learn anyway.

I had my “aha moment” and so did he—it wasn’t that he was personally a lazy person, it was that he was struggling with his learning disability and didn’t have the tools or support to push through it, so he avoided studying. I sealed the deal: “So if you were a lazy person, would you have just spent the past 3 hours doing really hard tests with me and not giving up, so we can figure out how you learn best?” He said, “I guess not. Can I go now?” I will take that as a teenager version of a resounding, “you are right.”

*Dogs are not children, and children are not dogs. See Psychologist vs. Puppy for more information.

**I love this question. It can be adapted for all things. Were you born hating school? Were you born hating math? Were you born being angry at your parents? You can really start to pinpoint when attitudes and feelings about things started for students. I tip my hat to Ross Greene, of the Collaborative Problem Solving model for this one. It’s a gem.