As many of you who follow me on Facey Face know, I have been that poor kitten holding onto the branch. I have been swamped with my spring Testival and IEPooloza, in which I test kids for learning disabilities and hold Individual Education Plans (IEPs) to chart their course. Well, well, well, look at me now! 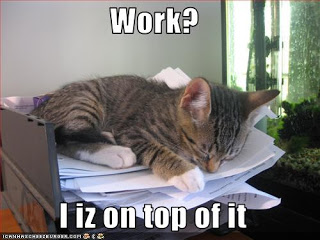 Only I’m not really sleeping because I know that round 2 is about to begin. This is the round of testing that happens right around spring break….

ED Testing. ED stands for “Emotional Disturbance” and it is one of the categories of disability in special education law. It is basically reserved for a small group of students who are exhibiting such severe emotional and behavioral problems that they cannot be taught in a general education setting. That being said, it is a very popular assessment because there are many students who by springtime, have worn out their teachers with their shenanigans, or many of the attempted interventions have not been sufficient.

To illustrate: I used to work at a school I called Haides Middle School, in which many of the students had emotional and behavioral challenges. Students threatened teachers, weapons were on campus frequently, and it was not uncommon for windows, doors, and walls to be punched. At times, fecal matter was left as a “present” for the Principal, and my vocabulary of offensive things one could say to others exploded (in several languages.) Now one might call this whole school ED, but it was not supposed to be. In fact, there was a group of students who were learning, but I never got to see them. Weird.

Anyhoo, the types of behavior I saw at this school were systemic because of the school’s location and demographic, and sadly poor leadership by administration, but the only intervention in town was special education. So I got ED referral after ED referral. These are pretty intensive assessments, so I was never the kitten on top of the paper at this school. My task was to figure out if the problem lied with the student (if he or she was emotionally disturbed enough to be “disabled”) or if the problem was circumstantial. I mean, I might be depressed and anxious and not able to focus on my work if I saw my dad murder my mom. I also might be acting out if I had chronic PTSD from witnessing violence in my community. Would I be “disabled?”

This is the job of the school psychologist—to sort through all the data, observations, history, observer reports, and individual assessment with the student to determine if the child is eligible as a student with an Emotional Disturbance. Yes, our job is to see if a student is disturbed enough to be disabled. It sounds crazy when you type it out. To complicate, there are a series of rule-outs and conditions that quite frankly, get second prize to the dumbest special education criteria (1st prize? I’m looking at you “significant discrepancy”).

For example, you must show that the unusual behavior is not a straight up behavior disorder (e.g. Oppositional Defiant Disorder, Conduct Disorder), but it comes from an emotional disturbance (e.g. depression, anxiety, psychosis). So, in essence you have to show that the kid isn’t just choosing to climb up a flagpole and wield a knife on his own free will, but it comes from an emotional place. (Um, how do you assess that?)

For me, I have framed it in a different way. I think it’s almost impossible to prove where unusual behavior is coming from, so I just focus on assessing for depression, anxiety, or psychosis first and worry about the explanation of the behavior later. I also look at what is the main reason the kid isn’t learning. If the child has cognitive limitations, that might be a better explanation for why the kid is not being able to manage emotions. As I write this, it just gets more and more complex. Each case is so unique, and you have to look at all the angles at once. There are few straightforward ED assessments. In general, I find it best to think of a few different types of students referred for ED.

Now I have compared kids (and husbands) to animals before, so here you go. I just love me a good metaphor. I know it’s oversimplifying, but blog posts aren’t supposed to be 8 hojillion pages long, I’m told.

1) Sheep. These students are a slam-dunk when it comes to assessment, because their emotional disturbance is fairly obvious. These are vulnerable students who have crippling anxiety that keeps them from coming to school, deep depression that keeps them from being able to complete work, or psychosis that interferes with daily functioning. These students often have suicidal or homicidal ideation and have histories of hospitalization. Despite years of counseling and intervention support, they continue to be highly vulnerable and cannot manage a typical school environment. You could also call them “internalizing” students, meaning the manifestation of the disturbance is inward.

2) Wolves. These students tend to be highly disruptive and kinda predatory. I know, I know, wolves are shy in the wild and only prey on others for food or if frightened, but let’s pretend for a moment that wolves are aggressive. And pretend that they argue with teachers, break the rules just to see what will happen, defy authority, and generally run with packs of other similar students.* These students are also suffering, in their own way, since they likely have a high need for control, have poor role models, and in general have difficulties with true relationships that aren’t manipulative. They are charmers and you can show them a video of themselves tagging the school wall and they will still stay it wasn’t them. You could call this group “externalizing” students, meaning the manifestation of their school problems is acting out. This group, in the absence of an underlying emotional problem (anxiety, depression, psychosis) is typically not eligible for special education services under “Emotional Disturbance.” But they still need help to break the coercive and aggressive pattern of interacting with others so they can succeed in school.

3) Sheep in Wolves Clothing I would say these students represent the majority of my ED referrals and are the most difficult to assess. These are students who pretend to be super tough and act out, but when you get them one-on-one for assessment, you find a deep emotional problem that is likely causing them to act the way they are. These students have both internalizing and externalizing problems. In these cases, you have to also look at eligibility from a response to intervention perspective. Are they acting out because they had a recent emotional trauma? Then, it would not be “abnormal” or “pervasive” to say a child is disabled because they are acting out. It’s circumstantial. If there were few signs of problems prior to the trauma, then it’s probably not ED. Are they acting out because they have never had counseling or behavioral interventions? Then you can’t show that they need special education to be successful because you haven’t tried anything yet in the general education setting (suspending a kid doesn’t count as an intervention). I also feel for the Sheep in Wolves Clothing because they too need intervention and they may or may not qualify for services with the way the law is written.

The length of the post shows the complexity of assessment for ED. Part of me feels like rather than trying to sort out if a kid is “disabled enough” to qualify for special education, I should spend that time doing actual interventions. Whether kids be Sheep, Wolves, or Sheep in Wolves clothing, they still need psychological help, and the families and teachers need support.

To close, the other day, I saw a student at my school rip up and throw away a referral he got in the teacher’s face, screaming “MERRY CHRISTMAS!” To her credit, I’m sure she wanted to throw it back and say “HAPPY NEW YEAR! You’re suspended!” but she was calm and professional and redirected him to my office. If you don’t see blog posts for a while, you know why. It’s that time of year.

*How to deal with these students? Here you go, a video demonstration

Comments on Kittens, Sheep, and Wolves. Oh My.