I have a confession, people. 28 years ago, I lied.

I told a group of my elementary friends that I saw “Cats” the Broadway musical. All these girls were talking about it and I felt left out. So I said, “I loved it too!” Then, things got hairy (no pun intended). They started asking questions.

Girl: “Which one was your favorite?”

Another girl: “What was your favorite part?”

Me: “Um…I liked when they were singing.”

I managed to pull it off, and then it went horribly awry.

Girl: “Let’s play Cats at playtime! Which one do you want to be? I’m Grizabella!”

And it was downhill from there. Oh what a tangled web we weave. I still haven’t seen Cats. Perhaps it is too painful. Perhaps the Cat has my tongue and I can’t speak of it, since it reminds me I was a liar. Or, it’s a really old musical and it doesn’t show anywhere anymore. 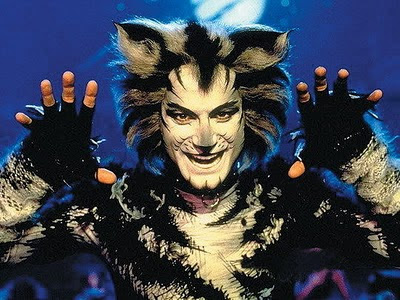 My good friend over at “Look at my Happy Rainbow!” has a cat story too. As a Kindergarten teacher, he had a class of 5 year olds all lie to his face simulataneously after he told the tale of his one-eyed cat. He thought it would be a rather unique story. The kids begged to differ:

In any event, I bring up cats and finally confess to you all my youthful transgression because I did a presentation last night on why kids lie* and I started thinking about my own experiences.

Last night, after confessing my 28-year-old lie, the group began to question if lying was bad or not. What’s the harm in trying to fit in? So what if everyone is lying about their one-eyed cat? What about white lies to protect people’s feelings? Should we only try to curb kids’ lying when they are trying to get out of trouble?

I was amazed to learn in my research that parents and teachers are only slightly better than chance at detecting if a kid is lying or not. I wonder if psychologists have a higher hit rate. Kids lie to me all the time. Though I usually have the advanced knowledge of what they did before they come into my office, so I cheat. One time, a kid was blatantly caught tagging the school with (duh) his name. He flat out denied it. Said he’d been framed. Only there were like 3 witnesses, and they were reliable sources. I wanted to give the kid the benefit of the doubt, but I didn’t want to be naïve either. I usually find it less important to find out the truth and more important to find out what the underlying issue is that got them in trouble. So I lied. I said, “I’d believe you, if it weren’t for the cameras.” The kid panicked and confessed. I’m a terrible person! I lied to teach him lying is wrong!

Research shows that kids lie mostly to make their parents and teachers feel better, or at least not be angry anymore. They do something bad, then feel bad about it, but don’t want the parent or teacher to be disappointed in them, so they lie. There was a great study in which they set kids up* to peek at a game, by having the examiner leave the room and watch the kid to see if he or she peeks at the answer. When they do, they come back and ask the question and lo and behold, the kid gets it right. They then ask questions like “Did you peek?” and most kids lie. When they say, “I’m going to ask you something, but first, do you promise to tell the truth?” truth telling goes up by 25%. The most powerful one is the question that lets kids know you value honesty: “I am going to ask you something and it will make me very happy if you tell me the truth.” Kids truth-telling increases by 50-75%.

So next time you’re trying to be CSI: Lie Inspecting Unit, or Kyra Sedgewick from The Closer, think about how the kid wants to please you and you might find that they will tell the truth if you emphasize how important it is to you. Oh, and also check yourself when you lie in front of kids. That’s a big one. Those white lies count too. Kids notice when you lie. Don’t let these teachable moments go by—you can teach about how you lied to spare someone’s feelings. Check out this clip from Liar Liar—lying just might be a social skill in a way…I mean, I got to play Cats with my friends, right? No harm there? I mean, in two days, we were playing “Grease” and I had seen that one. I even wore my pink jacket and told the group I had to be Sandy because I was born in Australia. And believe it or not, that wasn’t even a lie.***

*From the book “Nurture Shock: New Thinking about Children” by Bronson and Merryman. Great book.
**Oh how psychologists love tricking the children. We lie to research why kids lie. I love it.
***In retrospect, I’m not sure why my elementary school was all about musical theatre.

Comments on I'm a Liar. Sometimes.