Anyone who has been a therapist or counseling with kiddos for a while will appreciate this post. I don’t know about y’all, but there are some things in my play therapy kit that I kind of want to throw away because every kid seems to want to play it and I’m so over it (Uno and Connect Four, I’m looking at YOU guys!). I often need play therapy toy “crop rotations” to mix it up. Of course, sand tray is always a classic that never leaves, but sometimes I throw a new dinosaur in there to see if it morphs into the principal or a bully at school. It’s a good time.

There are some kids though who don’t play with anything in the room or get bored easily with the materials you have. I had such a kiddo a while back. He was a kindergarten kiddo who was referred because of impulsivity and aggression in the classroom. He spent most sessions complaining about my toys and asking why he had to be there. At the same time, I had his middle school equivalent in my office a few hours later. Only instead of aggression in the classroom, he also showed aggression in the community. And would you believe I found a series of toys and activities they BOTH liked???

I think sometimes that boys present an extra challenge when it comes to helping them express the range of feelings they have. They tend to endorse “anger” pretty easily and the other stuff takes a long time to get to. That is, unless you have this fabulous tool called “Emotes”.* 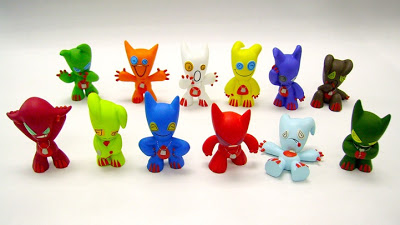 I was at a convention and was drawn to these little guys who each represented a different feeling, positive, negative and nuanced. For example, “Boom” is the angry one, “Joi” is the happy one, and “Can’t” is the frustrated one. I bought the starter kit and the introduction book to try them out. My boys LOVED them. My kinder poppet wanted to read the story every time, and he loved finding the ones that matched his feelings (he gravitated toward Imp-the mischievous, Boom-the Angry, and Super-the confident). He started drawing them in class spontaneously and would do almost anything for a sticker of one of his guys. He even referenced them in reflecting on his own behavior (e.g. Dr. B, I was like “Hype” today in class and got in trouble) Como se dice AWESOME?

My middle schooler, who was notoriously “too cool for school” ignored their pointy little faces for about 2 weeks, and then finally gave in. He started playing with them and wanted to draw them and go on the website and find coloring pages or more stories about them. I did not see that coming! It gave us a way to talk about the feelings that underlie anger without him feeling like I’m a cliche “How does that make you feeeeeeeel?” counselor. Genius.

So after testing them out on my two toughest customers, I contacted the Emotes peeps and asked for them to send me more goodies so I could start integrating these little guys into the Kinder and 1st grade classes as class-wide feeling vocabulary lessons. Okay fine, I guess I am a “How does that make you feeeeeeeel?” kind of gal after all. I just think this is a more fun way to go about it. Plus, they have the books in Spanish. Holla.

Check out their stuff when you get a chance at www.emotes.com. Oh, and if you’re looking at it at work, turn the sound down because it starts off with a jaunty little song and a loud exclamation, “How are you feeling today!” It made me feel like “Jumpi” the first time. But the kids love the website because they have comics and whatnot. Enjoy!

*Note: Not related to the term “Emo”. When the term “Emo” first started percolating a few years back in the lexicon of my yoots, it took me a while to figure out what they were referring to. At first, I thought a group of students was calling a girl “Elmo” from Sesame Street, and I couldn’t work out what it was about, until I asked. It’s very different than Elmo, trust me. When I say Emotes, I also over-enunciate the “-tes” part of the word EmoTES to make sure I am clear. Emo has a bad connotation for kids.