Twice this week, I embarrassed myself by making an obscure reference to an obscure part in an obscure film to make a point. Has anyone else besides me and my husband seen Cedar Rapids, starring John C. Reilly and Ed Helms? No? Well then you would have looked at me with the same look these two groups of people did. But I like the analogy, so here you go.

In the soon-to-be-classic film, Cedar Rapids, starring John C. Reilly and Ed Helms, the main characters are insurance agents attending a conference to battle for the prestigious “Two Diamonds” award for excellence. In one scene, John C. Reilly’s character gives Ed Helms’s character advice: that in order to meet his goals, he can either “fight the tiger” or “daaaaaaance with the tiger.” In the context of the movie, it is basically a decision to fight the guy in the jacked up insurance system or work the guy and the system to your advantage.* And it’s funny because John C. Reilly he does so in his underwear and does a tiger dance. 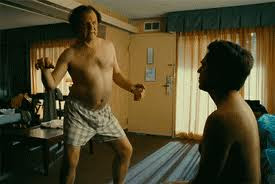 In one case where I embarrassed myself this week, the school staff and district muckidy mucks (sp?) were having a strategy meeting before a highly contentious parent meeting. The parent has had her child assessed three times over the course of the kid’s school history, and each time, the child came up in the intellectually disabled range cognitively (formally known as mentally retarded). She claims that the school district each time has not assessed him properly and further, that she is entitled to a hojillion dollars in compensatory education at the district’s expense for failing to bring him up to state academic standards. Oh, and the child is autistic as well. Like, biting other people autistic. Low and behold, the last assessment also came up with low cognitive scores as well. As the conversation turned to how to fight this mom and her denial, I told the staff, “I think on this one we should daaaaaance with the tiger” and I made a dancing gesture not unlike the one John C. Reilly does.

So I went on to explain the movie, and then suggested that we might partially validate mom’s concern, without totally caving in. I get denial. Dealing with the truth is painful. Externalizing blame happens. I can’t claim that if I had a severely disabled kiddo that I wouldn’t be a fighting tiger for his or her rights. I’ve never been in that situation, and can empathize with the grief and anger of having an out of control child. I know that some districts do not provide a very good education for some groups of kids. We’re not perfect, and we have no money to create perfect programs. But if I were in the parent’s situation, I would like to think I would not sue poor urban school districts for a squillion dollars in compensatory education and blame the teachers for my child’s disability. One never knows though.

Anyhoo, the mom’s big thing was that her child had untapped potential. And maybe there is untapped potential we can’t see because the kid is off biting and punching people in class. In my post-doc years, I learned a great way to describe the concept of untapped potential in kids with Autism. I had the great fortune to train with the amazing Bryna Siegel, autism guru, and author of The World of the Autistic Child and many others. She explained it something like this:

Each child’s cognitive potential is like a bowl. Some bowls are deeper than others. We can measure cognition in kids without Autism, because they comply with “on demand tasks” (as in, put these blocks together, answer this question right now, finish this puzzle this fast). Kids with Autism (or behavior problems, for that matter) have saran wrap over their bowls. We don’t know how deep the bowl is, because they have trouble performing on demand. The bowls could be very deep and untapped potential is in there, or the bowl could be shallow. We don’t know until we peel the saran wrap off. We peel the saran wrap off by working on the behaviors that are interfering with joint attention.

I proposed that we use the analogy with this mom. That way, we are acknowledging there could be untapped potential, but in order to fully see it, we have to address the behavior and work on “peeling the saran wrap” off. Instead of arguing about how “deep” his cognitive bowl is, we can shift the conversation to helping this kid connect to others and be safe. I am sure this is a mutual goal of the mom. Let’s just hope after the meeting, it looks a little something like this…. 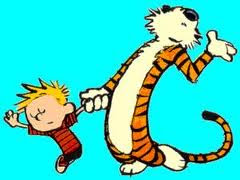 Wish me luck. I do want to have a productive and positive meeting. No one likes getting swiped in the face by a tiger mom.

Comments on Dance with the Tiger.