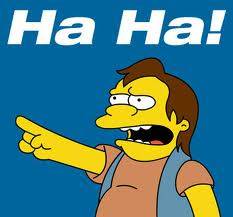 I just received a threatening email from Amazon Kindle. They (the royal “they”) said they noticed I hadn’t posted in over 30 days and they threatened to cancel my Kindle account where people can subscribe to my blog. Apparently customers want to read posts. Humph! Don’t they know that I am trying to raise a tiny person? I’m kind of busy. But I do suppose it is time to get back on the blogging wagon, and it is Bullying Prevention Month, so ironically, I’ve been bullied back on the blogging scene.* And yes, I realize there are only 4 days left of Bullying Prevention Month. For anyone who thinks “I can always work from home when the baby sleeps!” I laugh in your naïve face. I said that before I had a baby and I laugh at my own naïve pre-baby face. But I digress…

I am glad that bullying is becoming an issue that educators are taking on. I endorse prevention programs and intervening early when bullying behavior is discovered. I especially like how school psychologists can take on a preventive role in the creation of a positive school climate. A recent poll of the fabulous folks on my Facey Face page showed that school psychologists are active and involved in the prevention of bullying. A few resources they shared for you to check out:

I find that my role in the schools when it comes to bullying prevention actually sadly tends not to be in the prevention area, but in the psychological cleanup and intervention area. I have the distraught student in my office, who finally admits she is sad because she is relentlessly teased. I get the iChats emailed to me by parents to prove their child is being cyber bullied. I get the middle of the night emails from parents worrying their child is being bullied, and requesting a meeting. I get bombarded in the mornings before school starts to talk about bullying. And yes, I even got a parent showing me her secret iPhone video of her daughter being excluded on the playground. It seems like the bullying awareness campaigns at my schools are working.

I am glad that bullying is no longer being written off as a developmentally appropriate “kids can be cruel, what are you going to do?” kind of thing. The problem is, we have gotten so good at raising awareness, but we really haven’t taught the students (or adults for that matter) what to do once we see bullying behavior. By the way, I usually use the term “bullying behavior” instead of “bully” because bullying dynamics are really complex. I have seen kids be the “victim” one day and the “bully” the next.

Addressing bullying on the individual level is hard, especially since much of the behavior is hidden or underground, and there is typically a “he-said she-said” quality to the conflict. How we respond to bullying behavior is really important. While we can’t ignore it, we also can’t jump in and try to solve all of kids’ interpersonal problems for them. Sometimes, when we intervene, we even give lame advice (see: My Words Taste Yucky, by yours truly).

We also need to be careful not to see “bullying” under every single interpersonal conflict. In some of my schools, it has become a catchall for all negative peer interactions. Unfriendly look in the hall? Parent meeting about relational aggression. Child not invited to play tetherball? Request for anti-bullying intervention. During fantasy play, one child pretends to kill off another child’s unicorn? Two hour meeting with parents and students.**

Please don’t get it twisted. I’m not saying to ignore bullying behavior. Chances are, if its reached the level of involving you as a school psychologist, it’s serious, or at least the subjective experience for the student is that it’s serious. As school psychologists, we must treat each incident brought to our attention as “bullying” seriously, but also not jump in when it’s not necessary. The problem is, it is hard to tell in advance how serious an incident is. One incident could be the tip of the unicorn’s horn, or it could just be kids playing make believe and having normal conflict. I remember one kid who reported to his teacher that he was being bullied and was scared and she wrote it off as him being “sensitive” and then the next day another student brought a knife to school and threatened him in the bathroom.

So while we can’t jump to intervene at every peer conflict, we should listen to kids when they report bullying behavior. It’s a unspoken challenge for school psychologists to decide what requires individual intervention. That is why I’m a huge fan of prevention programs that teach actual skills to kids, rather than waiting until there is a school culture of bullying behavior that requires a ton of individual intervention.

Now, the real truth about how I feel about bullying will come out, from a new mom’s perspective. If Baby B grows up and someone is mean to her, I like to think I would gently coach her to deal with peer conflicts, and only intervene if necessary, like I do with my students. I like to think I would calmly alert the school to the incident and trust them to handle it. But it’s equally possible that I might just do the same thing as the parents I work with and flip out and call an emergency meeting. I might even turn all Mama Bear protective and demand a school-wide anti-bullying intervention, I don’t know. I just know that when I look at my baby girl, I want to protect her from all things mean. It’s unrealistic, but it’s totally different when you are the parent. This may be the beginning of a series of posts entitled: “Things I recommend to parents as a school psychologist that would be way harder if it were my own child.” I think I’ve figured out a way to be a secret mommy blogger with that series of posts…

*By the way, it takes every fiber of my being not to turn into a mommy blogger. I mean, who doesn’t want to hear about Baby B’s latest developmental milestones? Posts about her visually tracking objects and crossing midline, orienting toward sound, and reaching for objects have broad appeal, right?

**I am not making this up. Happened to a school psych friend of mine. I asked him if his advice was to teach the other kid to make believe their unicorn had a protection spell from all harm. It wasn’t. It should have been.