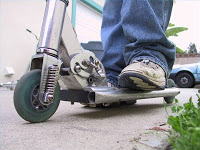 Scene: It is a sunny day, 4 children and one psychologist are seated outside at the lunch tables of a nonpublic school for children with emotional disturbance. Birds are chirping.

Aaand….Action.
Three of the four children are eating bologna sandwiches. The fourth child looks at the sandwich and screams, “I hate this sh*%!” and throws said sandwich at psychologist.

Psychologist wipes bologna and mayo off of face and says, “I see that you do not like your sandwich. It’s okay to not like bologna, but it is not okay to throw food. Can you use your words instead?”

Bologna Hater jumps up and runs for a Razor Scooter.

Psychologist leaps up and says, “Scooters are for riding, not throwing. Put down the….

Scooter is thrown at psychologist

Questions from the audience?

Yes, you….No, I do not have a future in script writing.
Young lady in the front?…Yes, this really happened to me.
The gentleman in the back…No, thankfully no stitches required.
And last question?…Yes, bologna is a vile meat, I should have known better.

So there you have a dramatic reenactment of me trying to de-escalate an emotionally disturbed child. What the scene didn’t let you in on is that this little guy was a foster youth who had just had a supervised visit from his mother that had not gone well, and his reaction had little to do with the processed meat. This example stands out in my mind only because it is one of the few times I have been unsuccessful in talking down an angry kid from becoming violent.

Not to toot my own horn or anything (too late), but there are few kids who I can’t get to comply with instructions. My tips aren’t foolproof, but they have worked on more occasions than not. And since my last post about getting bitten resulted in requests for some tips for de-escalating students who are angry, here you go:

2) Anticipate, anticipate, anticipate. If you see a child becoming increasingly upset, intervene early in the chain of events. Understand that verbal aggression is the “gateway” to physical aggression. If you hear anything about anyone’s momma, intervene swiftly and redirect. “That’s not appropriate language for class. I need you to use respectful language. This is a warning. If I hear it again, you both will receive a classroom service.”

2) Anticipate when the child may have external factors that will impact his or her ability to control his or her anger. For kids with turmulteous home lives, they often cannot check their anger at the school door. For vulnerable students, provide a brief, private, check-in before class and give them a replacement behavior for acting out in advance. “I know you had a rough weekend. If you find yourself getting upset, then you can use this pass to take a break for 5 minutes.”

3) If prevention and anticipation are not sufficient, then we move to Defcon 3: Talking a kid down once they have already escalated a bit. This may look like the student grumbling, cursing under his or her breath, pushing something, etc. First, try to redirect privately if possible. There is a lot of secondary gain (usually attention) from acting out. In close physical proximity, acknowledge the anger. “I know that makes you angry when Joey talks about your mom. He will have a consequence for that. I need you to take a deep breath. Then, you can choose to take a quick break outside or go in the reading corner to relax. It’s up to you.” That way, the kid feels validated, and has a face-saving way to pull it together again.

4) Defcon 4: You try the private conversation and the kid escalates (shouts profanity at you, says he doesn’t care, or postures toward you or another student). In a business-like but firm tone, tell the student you need to speak with him or her outside for a moment. You could say something like, “I see that you are very upset. For your safety, we are going to step outside for a moment. This is your chance to turn it around so I can tell your parents how well you controlled your anger today.” Model calm. If you get worked up, it will likely escalate the situation.

5) Defcon 5: If the student refuses to see you privately outside, intervene in the chain of events you have set out in your classroom already (e.g. warning, classroom service, detention, call home). You can also call for backup at this point. There is nothing worse than being in a classroom alone with an aggressive student. If your phone doesn’t work (you can tell I work in schools where this can happen), and you have an aggressive child, move the calm children out. It is far easier to get 20 calm kids out the door than one out-of-control child. Say, “Children, for your safety, we are all going to step outside in the hallway while Jeffrey calms down.”

6) And most importantly, never serve an angry child bologna. Just don’t do it.

Comments on Back AWAY from the scooter. I’m a professional.