Last night, my husband and I helped a friend chaperone his 15 year old daughter’s first (and I think last) high school party. His daughter had a great idea of quarantining all the adults into one room so it would still seem like a party. She even put up a sign, so we could understand our place. 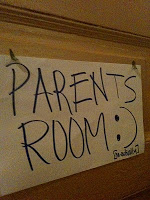 The fine print says, “No, Actually.” As if “Parents Room” could be code for something else…

Yeah, we stayed in the kitchen with watchful eyes, periodically frightening the teenagers with our aged presence.

Being a chaperone at the party made me feel simultaneously 1000 years old and also kinda hip, because I knew what they were all up to. Things haven’t changed that much since I was in high school. They weren’t even trying to be slick about sneaking things in. I mean, who carries a duffle bag to a party? Did you just come from the gym, buddy? Do you think I think that’s just a coke, stumbling young lady? And I know that’s not a new fragrance, called “Eau de Pot,” kids.

I applaud my friend for calling in the adult reinforcements. I can’t remember going to a high school party when I was in high school that had parents at it, trying to keep the liquor and drugs out. I even remember a few parents supplying the liquor. In retrospect, I am now horrified at that.

For this party, the five of us did the best we could to keep the party under control. It was the longest 2 and a half hours of my life. I was also a bit paranoid that I could potentially see one of my clients, as one girl I was working with went to that high school. I had an imaginary conversation with her: “I am wondering if this is the risky behavior your parents hired me to help you with?” Thankfully, she wasn’t there. My husband did run into a few horrified young men who he had coached in basketball before. It was kind of fun to see these kids’ worlds collide in the kitchen of my friend’s house. I imagined they were thinking, “Why is my coach here and does he know there isn’t a basketball in this duffle bag?”

We made periodic rounds throughout the house to confiscate liquor. If 15-year old me had seen 33-year old me doing this, she would have been mortified. Toward the end of the night, my husband made a round to collect all the contraband (again) and came back with a giant Hefty bag of liquor. Damn, these kids are sneaky. At one point, a girl waiting for the bathroom took a giant swig of rum from a bottle (classy), because apparently, she forgot there were parents 10 feet away. I told her she needed to pour it out. She looked terrified that she had been caught, but then proceeded to gulp it down on her way to the trash, gurgling, “I’m sorry!” Girlfriend puked about an hour later, which is a far worse punishment than being caught by me.

The whole time, I couldn’t help thinking about adolescent development. I know, I can’t shut it off on the weekends. It’s a curse. I know that some amount of risk taking is normal for adolescents and may even be biologically driven. And it is certainly amplified in large groups of peers (great, the whole school was at the party). Teenagers also take longer to make decisions about risky behavior than adults (even in deciding about fairly obvious risky situations like whether you should swim with sharks or drink Drain-o). You might think that thinking longer about a decision is good, but paradoxically, thinking longer about a decision is kind of bad, because it should be instinctual not to drink Drain-o. At this party, the kids were calculating the risk of being caught by the adults with the social-emotional drive to engage in novel, exciting, and emotionally-charged behaviors. Guess what won in the end?

We shut down the party at midnight on the dot. I felt a bit uneasy about letting these kids find their way home. Fortunately, they can’t drive yet. I was torn between my psychological theory (risk taking and experimenting is normal) and my maternal instincts (You’re only 15! Come little children, I will drive each and every one of you safely home and counsel you on the dangers of drugs and alcohol).

Like the kids, I too was torn between my rational brain and my emotions. I knew from research (and my own experiences of getting home from parties), that the kids would live to tell about how some old lady (me) made her throw away her rum and how their coach busted them with a 40 oz of crappy beer. I know my friend did everything possible to keep the party drug and alcohol free without humiliating his daughter by frisking everyone who came in. He even recruited his daughter to be the main enforcer, and she did.

On the way home, I asked my husband if he would ever let our future teenagers have a party at our house. He said he would, if we were there. I suppose I would too, only I fear that maternal-me would run into the living room and exclaim, “Surely you all would be just as entertained with a rousing game of Scattergories!” My daughter/son would die of embarrassment. Surely it’s better to not have a party at all. Then again, my daughter/son would just find another party and who knows if the parents would be as vigilant as my friend. Then AGAIN, I went to the unsupervised parties as a yoot and I think I turned out fine.

I love how I am pre-worrying about a fictitious high school party 16 or so years from now. I know I have more empathy for parents after last night. In the abstract, and from our own experience, we know that risk taking is normal. In reality, it is hard to watch.

Especially the making out in the hallway for 20 minutes. Classy.

Comments on Ain’t No Party Like a West Coast Party…Screeeeech…with Chaperones.