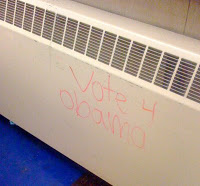 Every morning, I am greeted at my office by graffiti. I am blessed that the dead rat and ant party has moved elsewhere, but it’s…

The Worst Party Ever

I have written before about how when I do group counseling, I always make it about building positive traits rather than having students join the…

Don’t you hate it when you have to eat your words? Today was one of those days. I had to take my own advice and…

Can Someone Tell Me Why This Chicken Soup for the Educator’s Soul Keeps Burning My Tongue?

My last week of school was this week. I had lofty goals of meeting with each of my caseload of counselees and processing the end…

One time, I went on a blind date with a pirate. Ha! Bet you didn’t see that coming from a blog about education. It’s true….

Don’t fret. This isn’t a post about the 1990s R&B group that infused mild rapping into their vocal styling that was so “bad” it had…

Are you Playing Around on the Job Again???

“We can be sure that all happenings, pleasant and unpleasant, in the child’s life, will have repercussion on her dolls” -Jean Piaget I have said…

Once again, I feel compelled to show this hilarious clip from Summer Heights High, a mockumentary of high school students. Originally, I thought it was…